Vote now for the world's most glamorous toilet 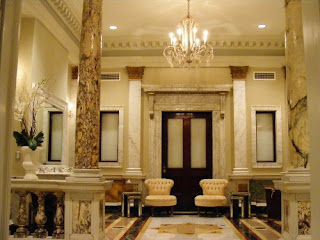 I'm currently compiling an article on the world's most glamorous toilets for MSN UK and am seeking recommendations. While the state of many public toilets will have you running for the restroom exit, there are those that make more than your pants drop. Nominations so far include: the luscious lobby loos at the Tremont Plaza Hotel in Baltimore, Maryland (pictured above) which feature imported marble, stately columns, grand chandeliers and hand carved woodwork; the wondrous washroom at the Langham Club in The Langham in Hong Kong where the door is padded in luxurious silver silk; the glitzy golden dunnies at Dolce & Gabbana's aptly named Gold Restaurant in Milan, and the throne-like toilets at Jack's Camp in Botswana.

If know of a fancy facility that'll flush away the competition (yes, more terrible toilet humour), then get your vote in now.
Posted by Kim Wildman at 9:24 AM

Gosh, you don't want to do anything in that beauty!Have you seen the most expensive toilet?? Made of gold: http://home.howstuffworks.com/most-expensive-toilet-in-world.htm