People & Places photo comp: And the winner is... 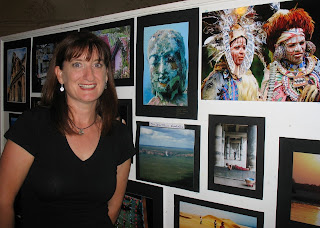 I knew I lived in a very talented, well-travelled and generous community, but even I was blown away by the sheer number and quality of entries I received in the People & Places travel photography competition I organised to help raise money for my War Child Cambodia Cycle Challenge.

With more than 195 fantastic photographs received from the residents of the Byron Bay/Northern Rivers region of NSW, the three judges (Jeff Dawson from the Byron Bay Echo, local Bangalow-based photographer Lisa Sharpe and head of the Bangalow Chamber of Commerce, Michael Malloy) were certainly faced with a hard decision. In fact, there were so many worthy entrants, the winning photograph had to be decided by a secret ballot.

In the end the overall winner was Darren Pearson of Bangalow for his picture of Samburu women in traditional ceremonial garb taken in Northern Kenya (it's the picture in the top right-hand corner of the photograph above - and, yes, that's me), with second place going to Nharyan Feldman of Coorabell for his photograph titled 'In the moment' taken in Nepal.

For my part, I'd like to thank everyone who participated in the competition and attended the exhibition for supporting such a worthy cause and making the night a huge success. In particular I'd like to thank Michael Malloy of the Bangalow Chamber of Commerce for all his help organising the event and Darren Pearson for donating his $200 prize back to the charity. Your generosity helped raise $3100.

Having already raised $1000 from donations and a further $900 from a smaller exhibition in Toowoomba, I am now only $1900 from reaching my goal of $6,900. If you are able to support me and help push me over the mark, I’d greatly appreciate it. Tax-deductable donations can be made safely over the internet through my page on the Everyday Hero website.

Picture: Courtesy of Christobel Munson.
Posted by Kim Wildman at 5:36 PM No comments: 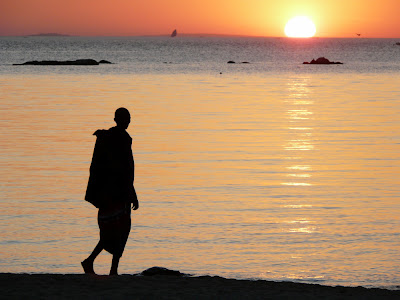 I've been so busy with my fundraising efforts for my War Child Cambodia Cycle Challenge that sadly my poor blog has been neglected of late. To help kick things back into gear, I thought I'd highlight one of my favourite travel photographs of the sun setting over Lake Victoria which I took in Tanzania in 2008 while helping Philip Briggs update the Bradt Travel Guide to the country. The following short piece I wrote about the picture below was recently published in the Escape section of the Brisbane Sunday Mail:

"African sunsets are made for gin and tonics. It's a cliche I know, but I enjoy the ritual of sipping the beautifully crisp, clear drink while watching the sunset over the veld. From my box seat sitting on a small strip of sand wrapped around the south-eastern edge of Lake Victoria, I watch with glass in hand, mesmerised as deep oranges, rich reds and powerful pinks dance across the horizon in a silent symphony of colour. Setting my drink down on the sand, I pick up my camera and focus the lens on the play of light as the sun slowly sinks into the lake's far horizon. To my surprise just as I click the shutter a Massai warrior silently walks across the beach and into my viewfinder. Only in Africa I muse. Raising my gin and tonic, I salute the African sunset. Mzuri sana!"
Posted by Kim Wildman at 8:36 AM 3 comments: