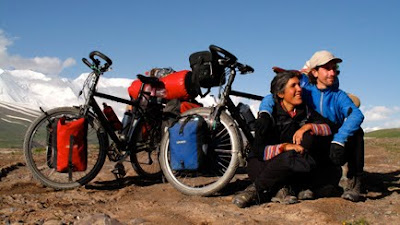 My dear friends, Krista Bernard and Dan Coward, who kindly trained with me in the build-up for my Cambodia War Child cycling adventure, are organising a new cycling challenge and are looking for participants. The 12 day Ride for the Rainforest Cycle Challenge running from 22 February to 5 March 2011 will traverse the beautiful island of Sri Lanka and raise money for Rainforest Rescue.

All you need to take part is a great sense of adventure...and a little cycling training of course. But if you're up for the challenge, you couldn't want for two better guides.

Krista has an indomitable cycling history. In Australia, she traversed the Nullarbor and Central Deserts on dirt tracks, has ridden down the east coast, and cycled around Tasmania. Pedalling 15,000km across 19 countries – from Indonesia to Egypt – won her the prestigious Young Adventurer of the Year Award in 2000 by the Australian Geographic Society.

Krista recently returned from an 8,811 kilometre expedition from London to the Himalayas with her partner Dan. It was inspired not only by Krista's first world cycle but by their mutual love for sustainable travel. At the same time, Krista and Dan raised much needed funds for Rainforest Rescue.

On Thursday 1 July, Krista and Dan will be giving a slide presentation of their cycle adventure from London to the Himalayas at the Mullumbimby Civic Hall at 6.30pm. See the photos and hear the stories – which may inspire you to take up the challenge to join them to Ride for the Rainforest in Sri Lanka next year. All proceeds from the evening go to Rainforest Rescue.
Posted by Kim Wildman at 9:42 AM No comments:

Can you ever be too old for backpacking? 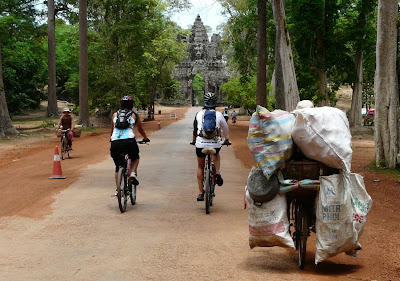 Backpacking around the globe is a great adventure, especially when you are young and don't have any strings to tie you down. But with so many people putting off having families and travelling later in life, should there be an age limit on backpacking?

I was 27 years old when I set out on my first adventure-come-backpacking holiday – a month-long overland trip taking in South Africa, Zimbabwe and Zambia. But it wasn't until a few years later, after I'd turned 30 and had landed a job with Lonely Planet, when I finally felt secure enough in myself to take off on my first real extended solo backpacking adventure - this time bussing and training my way around the lesser known parts of Eastern Europe. So as a bit of a late backpacking bloomer, I've usually always been the oldest person in the dorm.

Yet some 10 years on as I unpack my bags from my latest adventure in Cambodia I'm wondering if, at the ripe old age of 41 years, I'm starting to get a little too old for this? I've already traded in my traditional rucksack for a far more practical and convenient – and might I add less backbreaking – trolley backpack, so perhaps it's time I hang up my hiking boots and sign-up for a seniors' only bus tour of Europe?

For me, age always has been, and hopefully will always be, a number. But at the same time, as the years have marched on I've noticed the gap between myself and younger travellers at hostels is indeed widening – while they revel in all-night drinking parties and only crawl into their bunks just before dawn, I'd much rather find a hole-in-the-wall restaurant where I can enjoy a local meal along with a glass of wine (or two) and be in bed well before midnight. I also appreciate a few more luxuries, such as hygienic bathrooms and clean bed sheets, than I did when I was younger. But does this mean I should give hostels a wide berth?

Hostels of course offer a great budget alternative form of accommodation and they are excellent places to meet like-minded travellers. Yet while they were once the domain of drifters and students, today's hostels cater to the young and the young at heart with many dropping the "youth" tag and opening their doors to families and mature-age travellers. Granted I'd find screaming children as annoying as drunken teenagers and late night snorers, but no matter whether my dorm mates belong to Gen Y, Gen X or the Baby Boomers as long as they share my independent travelling spirit then, as far as I'm concerned, they can only make my hostelling experience richer.

Perhaps as Alison Brick once noted for Vagabonding in the end it's all just a matter of definition. That is, if to you the word backpacker means the party-all-night, sleep-all-day gap year student whose round-world trip drifts by in a drunken blur, then by all accounts my backpacking years are well behind me. But if you believe backpackers are in fact independent travellers who don't go in much for set itineraries, who avoid package tours and who relish the opportunity to get off the well-beaten tourist trail, then apparently I'll never be too old to be a backpacker.

Naturally I subscribe to the latter definition. So while I may well be the oldest person at the hostel, as long as I continue to enjoy the challenges and complexities of independent travel, I can’t see myself giving up backpacking anytime soon.

What do you think? Can you ever be too old for backpacking? I'l love to hear your thoughts.
Posted by Kim Wildman at 1:21 PM 3 comments: